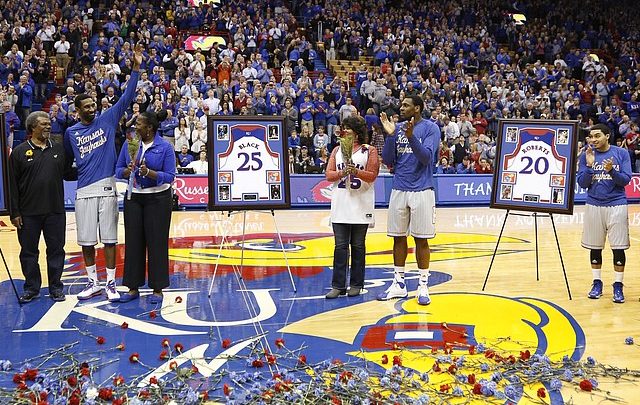 Not Your Average Senior Night

Every game at Allen Fieldhouse is an unforgettable experience.  From the chills provided by the pre-game video to the animated crowd that inevitably packs the iconic venue to the great play on the court, a Jayhawks game is a truly unique event.  Yet one game of every season provides an additional, unrivaled emotional punch—Senior Night.

The crowd is peppered with soon-to-graduate KU students, giving the fan base even more motivation to cheer on the team.  It’s also the fans’ last opportunity of every season to send the Jayhawks off to the year-end tournaments. All the usual fanfare and KU rituals are done with an extra push as the crowd hopes for a Final Four appearance.

The game, which often has real significance in terms of post-season seedings (and sometimes in terms of the team’s final conference standing) isn’t the only source of excitement, though.  The post-game activity of a Senior Night is something else altogether.

The Jayhawks don’t simply start all of the seniors and let them play until the first time-out.  They don’t just trot out those who are leaving and have them take a bow to a round of applause.  Instead, every graduating member of the team gets the opportunity to take a microphone at center court and to deliver a message to the fans packing venerable Allen Fieldhouse.

Seniors often give heartfelt, emotional (and, yes, sometimes humorous) speeches to the crowd, their coaches and teammates.  They recount what they loved about being part of the University of Kansas and the Jayhawk basketball tradition.  They reflect on what they’ve learned and what they’ve enjoyed, doing their best to express their love of the program, the game and the fan-base.

Any Kansas fan who’s attended a Senior Night will tell you that it’s one of the year’s highlights.  Senior Night isn’t just about the game.  It’s also forges a truly one-of-a-kind connection between fans, players and coaches.

This year’s Senior Night will feature a game against the University of Oklahoma Sooners on February, 27, 2017.