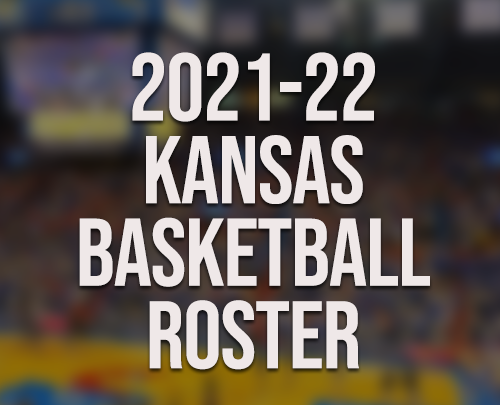 After key players Jalen Wilson, Ochai Agbaji, and Remy Martin all announced their decisions to leave the NBA Draft, Kansas’ roster is finalized. Here’s a look at 2021-22 Kansas Basketball Roster:

Now, here’s an analyzed projected starting lineup for the Jayhawks along with some potential role players:

This choice is fairly obvious considering the numbers that Martin was able to put up at Arizona State (19.1/2.8/3.7). Martin will bring the shot creating, scoring, and facilitating that Kansas lacked last year. In addition to his offensive abilities, Martin also brings elite speed and quickness that Kansas lost when Devon Dotson left for the draft following the 2019-20 season.

While Christian Braun could definitely be featured in the starting five alongside Martin, I think Bill Self will return to the two-point guard system that has worked so well in the past with the Sherron Collins and Mario Chalmers duo as well as the Frank Mason and Devonte Graham combo. Yesufu came alive at the end of last season, averaging 22.7 points and 1.9 assists in seven starts for Drake. Similarly to Martin, Yesufu will bring scoring and elite athleticism to a team that really needed it last season.

The leading scorer for Kansas last season, Agbaji will be coming back to Kansas for his senior season with a lot to prove before making the jump to the NBA. While there are no doubts about his shooting and defensive abilities, he needs to be more assertive offensively, and he has a great chance to showcase that ability this season. At the very least, Agbaji will be the best pure shooter and perimeter defender in the starting five.

After an outstanding start to his redshirt freshman year in 2020, Wilson slowed down offensively as the year progressed, but that didn’t stop him from being one of the most productive players on the team last year. Averaging 11.8 points and 7.9 rebounds, Wilson was third in scoring and first in rebounding last year. While it may be hard to find shots on such a stacked team this year, I think that Wilson will return as the most-improved player on this team, and I can see him finishing the year as a potential first round pick.

After seeing flashes of All-America potential throughout last season, McCormack is another guy I can see coming back as a much better player this year. After averaging 13.4 points in only 23 minutes per game last year, McCormack progressed tremendously over the course of last season. With improved consistency, McCormack has the potential to be an All-American in his senior season.

After starting every game of his sophomore season, Braun likely will be taking a supporting role this year barring some unforeseen extreme improvements. With all the talent coming to Lawrence, I can’t think of a year with more competition for playing time especially at the guard position. I expect that Braun will have really improved his shooting consistency when the season rolls around, as that is going to be what we really need from him this year. With less pressure to create for others, Braun should have a much better and more consistent season this year, regardless of if he starts or not.

The oldest player on the Kansas team, Coleman-Lands is entering his seventh season of college basketball and will turn 25 on July 15th. Known as a great shooter, Coleman-Lands will largely be set up on the perimeter waiting for catch and shoot opportunities, but he does have the ability to create his own shot as well. In addition to his shooting, he will obviously bring a lot of leadership and grit as such an experienced player. With a good summer, Coleman-Lands is another player that could earn a starting spot on the team.

Another super-senior, Martin will be making the jump from DII to DI basketball this year after being a finalist for DII Player of the Year last season. After averaging 25 points and 9.1 rebounds and shooting 45 percent from three-point range last year at Missouri Southern State, Martin seems more than ready to play in the Big 12. Known for his shooting ability, Martin will bring real diversity to the front court, especially in the pick and pop game. While it’s hard to know how good he will really be for the Jayhawks, at the very least he will be a solid role player purely because of his size and shooting.

A player who might not see quite as much playing time this year because of the depth at the guard position, Harris should still be a valuable contributor in the minutes he earns. After backing up Marcus Garrett last year, Garret’s influence on Harris became clear as Harris’ defense started to shine towards the latter half of the season. This year, Harris will likely serve as a defensive spark plug and facilitator as his offensive game continues to develop.

A player who likely won’t see the court too often, Lightfoot is still a fan favorite. With his defense and all-around gritty style of play, Lightfoot is another player who will most likely be inserted for defensive purposes.

Now, here’s some information about the freshman on scholarship for Kansas this season:

A smooth athlete, Pettiford likely won’t play very often this year, but he is an exciting prospect for sure. He is mostly known for his ability to attack the rim and play fast in transition. With improvements in his shooting, Pettiford could turn into a great guard for Bill Self and the Jayhawks, but that probably won’t happen this year on such a stacked roster.

Another outstanding athlete, Cuffe is also known for his ability to play in transition; something that Bill Self covets in his guards. Additionally, Cuffe is great at getting to the rim and finishing with either hand through contact. He is also known for being a stifling defender, which will likely be the only reason he could see the floor this year unless he can improve his shooting and distribution.

Similarly to Cam Martin, Clemence is a player who’s known for his ability to stretch the floor as a forward with his shooting ability. Additionally, Clemence is known as a player that is willing to compete on both ends, and his offensive potential is impossible not to notice. While he might not play a lot this year, his shooting gives him a chance, and he will likely be a starting big man for Kansas next season.

Known for his athletic ability, Adams is simply a freak athlete who plays hard on both ends. He will need to improve his jump shot to take his game to the next level, but he is known as a tough player who is able to attack off the dribble and finish around the rim with ease. If he sees a lot of minutes, it will be because of his ability on the defensive end and his grit.

While the Jayhawks struggled a bit last season, the 2021-22 Kansas Basketball roster has a chance to be special. With so much talent across the board, it’s possible that Kansas will have multiple preseason First Team All-Big 12 honorees and multiple preseason All-Americans. It’s going to be an extremely competitive year in college basketball, and Kansas certainly has a chance to be the best team of them all. | TICKETS