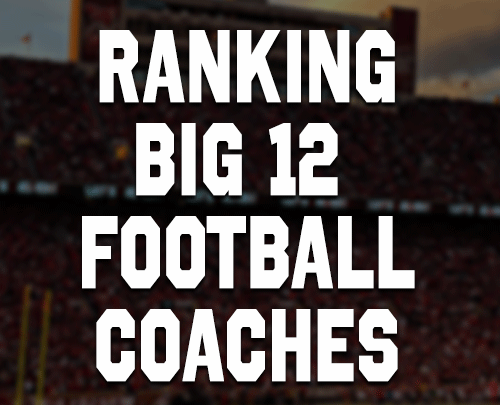 Sporting News recently came out with a ranking of college football coaches for the 2021 season, and Big 12 coaches fared well against coaches from other conferences. |READ MORE|

Almost every coach in the Big 12 was ranked in the top half of the rankings, with the highest ranked being Lincoln Riley of Oklahoma. Here is a rundown of the Big 12 coaches featured in this list:

Since his arrival at Oklahoma, Lincoln Riley has done nothing but lead the Sooners to winning seasons. In his four seasons as head coach, Riley has posted an overall record of 45-8 and he has never had a season with more than two losses. The Sooners have appeared in a Bowl every year of Riley’s tenure, winning the Cotton bowl in 2020.

After a difficult first season in 2016, Matt Campbell has completely turned around Iowa State’s football program in a matter of a few years. In his first year, the team went 3-9 and finished ninth in the Big 12, and in 2020, the Cyclones went 9-3 and finished first in the Big 12. Campbell also has two Bowl wins in four appearances since joining the Cyclones.

One of the longer tenured coaches in the Big 12, Mike Gundy has posted 15 straight winning seasons as coach of the Cowboys, finishing first in the conference once in 2011. With an overall record of 137-67 and 83-55 in conference play, Gundy has been running a consistently solid program for over 15 years now.

Coming off of a few lackluster seasons, Gary Patterson has dropped in the coach rankings recently, but given his longevity as coach (2000-Present) and his past successes, he still deserves a top 25 nod. Since joining the Big 12 in 2012, the Horned Frogs have a record of 69-44 and a conference record of 44-37. Additionally, Patterson has posted a bowl record of 4-2 since joining the Big 12.

After a five-year absence from head coaching, Steve Sarkisian is set to take over one of the most high-profile programs in the country in Texas. Coming off of an impressive stint as offensive coordinator at Alabama, it’s clear that Sarkisian was ready for another big-time job. With an overall record of 46-35 as a head coach, Sarkisian should at least be able to lead Texas to a winning record in his first season.

Since his arrival at West Virginia in 2019, Neal Brown has done well rebuilding the program. While his two seasons have not been outstanding by any stretch, his track record at Troy suggests that he should be headed on the right track. With an overall record of 46-27 and a bowl record of 4-0, Neal Brown definitely deserves to be in the top 50 and has a real chance to crack the top 40 after this season.

While Leipold has not coached in a Power 5 conference yet, he has earned a reputation as a winner which is exactly what Kansas needs in a coach. In his career, he has posted an overall record of 146-39 with six NCAA Division III Championships at Wisconsin-Whitewater and two bowl wins at Buffalo. After accepting one of the most dangerous jobs in all of college football, Leipold could catapult up the rankings if he is able to turn the program around. |TICKETS|

After finding endless success at North Dakota State, Chris Klieman made the move from FCS to FBS football in 2019 when he joined Kansas State. With an all-time record of 84-24 and four FCS National Championships, Klieman has rarely played losing football. Entering his third season at Kansas State in 2021, Klieman will look to improve on his first losing season since 2005.

After an impressive stint as coach at Utah State, Wells took a huge step up when he took the job at Texas Tech. So far, he has not been able to find much success, but Texas Tech should give him at least one or two more years to turn around the program. With an overall record of 52-48 and a bowl record of 2-2, Wells has plenty of experience and knows what it takes to win big games.

After securing his first head coaching job with Baylor, Aranda did not have a good first season as the team went 2-7 and finished ninth in the conference. Prior to joining Baylor, Aranda spent ten seasons as a defensive coordinator, most recently at LSU. At all of his previous jobs, Aranda was able to post impressive numbers, leading some extremely talented defenses. While his head coaching success has not come yet, the potential is certainly there.