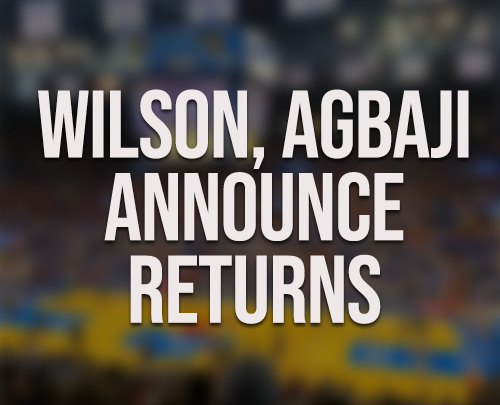 With the NBA Draft commitment deadline approaching, the Kansas basketball program has received great news from two of their best players from their 2020-21 roster. The KU roster just got more loaded.

Last Friday, forward Jalen Wilson announced that he would be returning to Kansas for his sophomore season. At 6’8” 220 pounds, Wilson is a force in the paint, leading the Jayhawks in rebounds last year as a freshman. In addition to his rebounding, Wilson has also showcased scoring ability from all three levels, and he has the frame to be a great defender. He should be one of the best players on a sure-fire top five team this year.

On Tuesday, forward Ochai Agbaji announced that he will also be returning to Kansas for his Senior season. After leading the team in scoring last year, Agbaji returns to Kansas as a likely candidate for the Big 12’s Preseason Player of the Year award. In addition to his scoring, Agbaji will also be the team’s best perimeter defender, and will likely guard each opponent’s best player.

The last decision Kansas is waiting on is that of Remy Martin, a transfer from Arizona State. A two-time All-Pac 12 player, Martin will likely be our best player if he decides to play one more year of college basketball. He has until July 7th to make his decision.

Any way you look at it, the KU roster is loaded for the 2021-22 season. With the return of the Border War with Missouri and a home matchup with Kentucky, this season has a chance to be special. Add in the fact that Allen Fieldhouse is set to return to full capacity and it’ll make the hairs on your neck stand up. | TICKETS