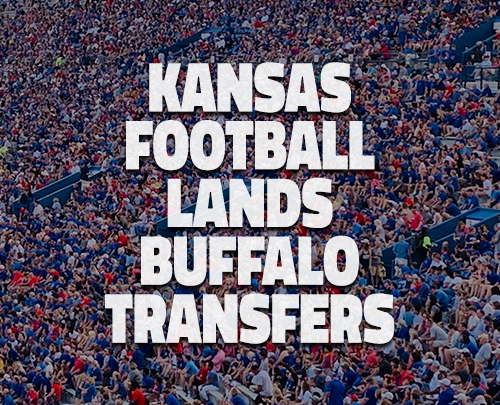 Over the past few days, several former Buffalo football players have announced that they will transfer to Kansas to continue playing under coach Lance Leipold. This is the most transfers Kansas has gotten from one school.

After consistently talking to the press about the importance of establishing a culture, coach Leipold has taken those initial steps. With the addition of a handful of players who have already played under him, Leipold has now taken a huge step forward in the path to building a real culture; something that Jayhawk fans have not enjoyed in over a decade.

On Sunday, third team All-MAC defensive tackle, senior Eddie Wilson, the speedy wide receiver and special teamer, sophomore Trevor Wilson, and All-Mac center, junior Mike Novitzky, announced their commitments to Kansas football for the upcoming season. Novitzky will have 2 years of eligibility left when he arrives on campus, and he will be an immediate starter at center for the Jayhawks this season after his Buffalo unit reached the semifinals for the Joe Moore Award which is given to the top offensive line unit in the country this past season.

On Monday, junior linebacker Rich Miller Jr., senior defensive tackle Ronald McGee, redshirt freshman Michael Ford Jr., and junior defensive end Zion DeBose joined the others in their commitments to Kansas, totaling 7 players thus far. The most exciting name outside of Novitzky is Michael Ford Jr., who was set to be a starter in his first season for Buffalo this coming season. Ford Jr. will provide immediate help on an offense that ranked last in the Big 12 in offensive efficiency.

With the addition of these new impact players, the team is set to begin preparing for the new season, which will begin at home against South Dakota on Friday, September 3rd at 7 p.m. CT.

Be sure to check back here for more news about Kansas football transfers.