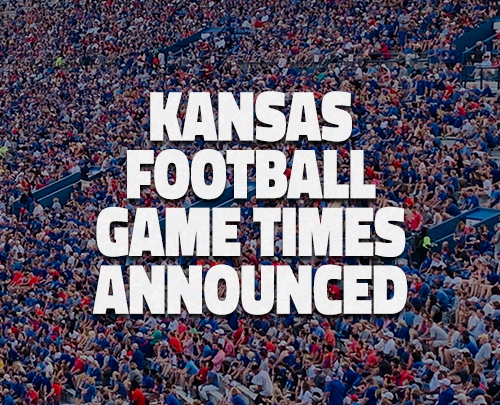 After a program changing spring, Kansas football has officially announced the game times for their first three games of 2021. This season will be their first under new head coach Lance Leipold.

Jayhawk fans will see Leipold in action for the first time on ESPN+ on Friday, September 3rd at 7 p.m. CT against South Dakota in what will also be the first game of the 100th season in David Booth Kansas Memorial Stadium. The second game will once again be played on a Friday, on September 10th at Coastal Carolina. The rematch against Coastal is set to take place at 6:30 p.m. CT and will be nationally televised on ESPN2. The last of the three games will be the first conference matchup of the year, as the Jayhawks will face Baylor at home on Saturday, September 18th at 2:30 p.m. CT, which will also be featured on ESPN+.  | TICKETS

After a disappointing final season under former coach Les Miles, Kansas football fans have a lot to look forward to. With the entrance of coach Leipold, a two-time MAC Conference Coach of the Year at Buffalo, the state of the program.