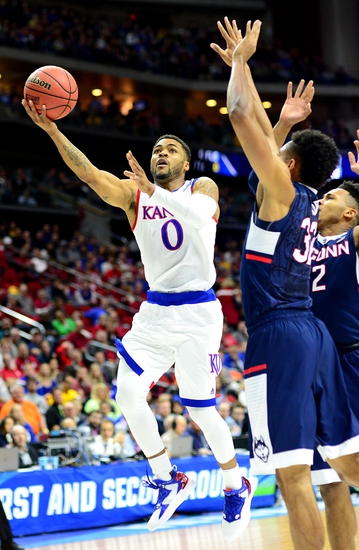 The dreaded second round exit did not happen for the Kansas Jayhawks over the weekend. Not that anyone was expecting it, but in years past KU wasn’t expecting it, and it’s happened more times than Bill Self would like to admit. KU reassured college basketball this weekend that they are in fact for real with two convincing wins. KU beat a hot UConn team on Saturday, and handed coach Kevin Ollie his first loss in the NCAA Tournament as a head coach. We heard all weekend how UConn is a different animal in March. The Jayhawks shut that up early on in that game, starting the game off with an  18-5 run.

Wayne Selden Jr. was great for KU, scoring 22 with 7 rebounds, shooting 8-15 from the field and knocking down a couple threes. He also had a few exclamation point dunks in the final minutes to put a cap on UConn’s season. Selden is clearly playing the best basketball of his career, where in the previous two years he didn’t really show up in the Tournament, and KU took a pair of second round losses. We knew going into the season that Selden was going to be key for KU making a final four run, and they Jayhawks are well on their way to one.

The most impressive thing about KU this year has been the depth, and the bench production, which looks like the best in the country. Indiana comes to mind as a close runner-up. Svi had 23 against Austin Peay, that’s a career high and not many people saw that type of performance coming. Cheick Diallo even checked in for 9 points against AP as well. Scoring wise, the bench wasn’t anything special against UConn but it’s good to know that guys can come up for KU when the Jayhawks are in foul trouble, which may happen in the games to come.

It’s hard to say that KU was the most impressive team in the first weekend. 1-seeds like North Carolina probably looked equally impressive if not better. UNC is one of those teams that is very good when they want to be. There are times in the regular season where UNC didn’t seem to want to play defense. Going back to their game against K-State, when they were down 10 with five minutes left in the game, and UNC ended the game on a 17-4 run. There were times in the ACC as well where they didn’t play well, and it’s because they weren’t very good defensively.

Virginia is another team that was very impressive in the opening weekend. The scores in their two games were very similar to KU’s. We could sit here and debate who the better 8 and 9 seeds in the field are all day, but it’s irrelevant because the better teams are suppose to win those games by 10-12 points based on the spreads those games are given by the experts.

What’s amazing hearing fans reacting to their team’s’ seed, draw, or location on Selection Sunday, and then the moment the ball is tipped on Thursday, it is completely forgotten. I get it, KU fans aren’t going to talk for four days about Austin Peay, because we know how that will turn out. So we have to talk about something, so we talk about how KU got the toughest bracket, or the fact that they have to go to Louisville for the round of 16 instead of Chicago. This is common for KU fans, they always think they have the toughest draw every year. But this team is better than the previous two teams. It’s the best team they have had since the loss to Kentucky in the 2012 National Title game.

It doesn’t matter where the Jayhawks play, the best team will win, and you can’t argue that KU doesn’t have as good a shot as anybody to cut down the nets in Houston. Next stop, Louisville. Next up, Maryland.

We will talk more about this later in the week, and don’t forget to check out Tickets For Less for all your KU NCAA Tournament ticket needs.