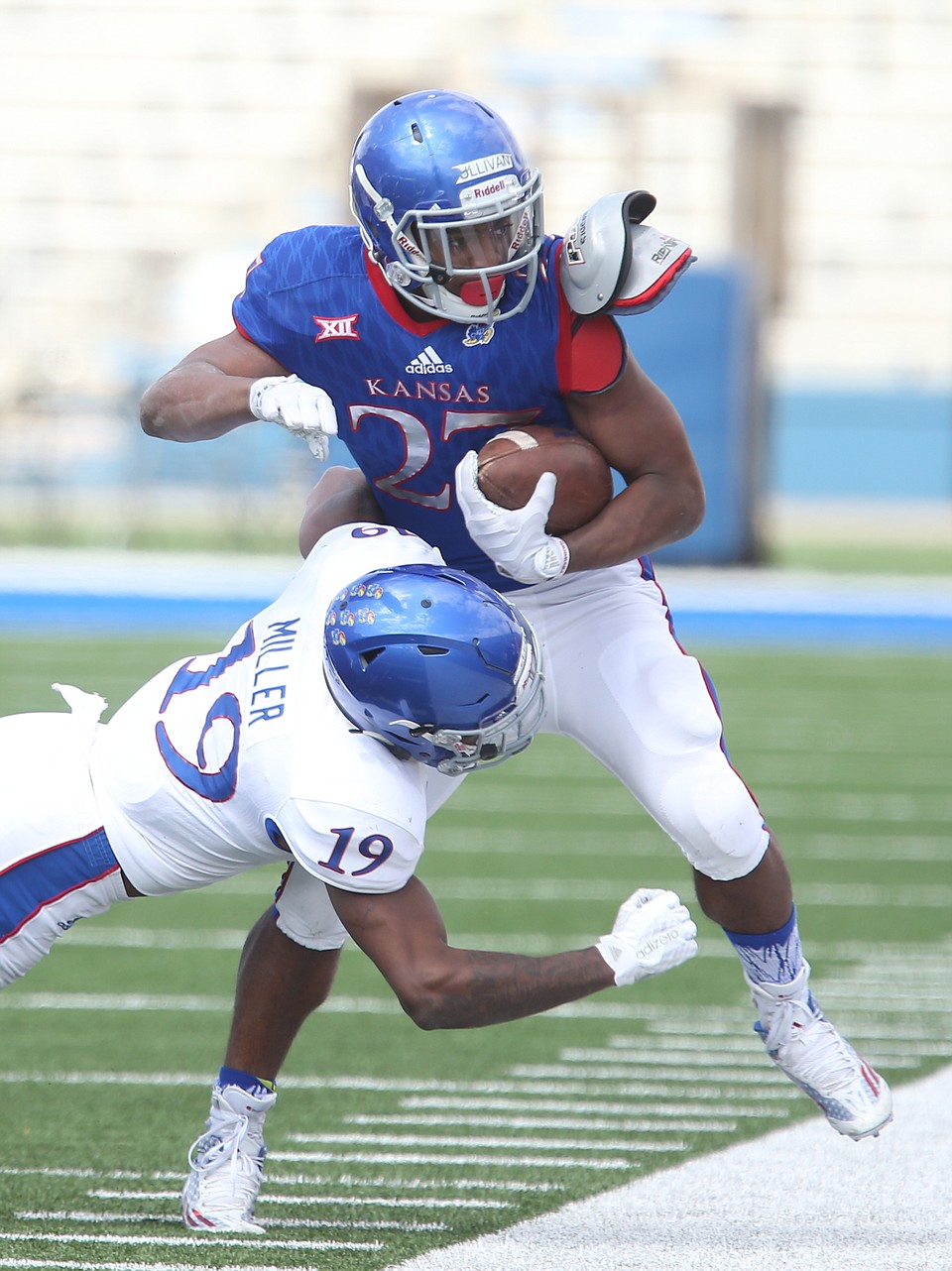 It was time for fans to see the newest addition of Kansas Football for the first time for the annual spring game at Memorial Stadium.

After a winless season last year that featured some bright spots for the future, David Beaty and his staff were anxious to see what their current group can do in a live game setting.

With an obscure scoring system in which the coaching staff awarded points for plays ranging from first downs to three-and-outs, the white team won the game over blue, 49-42.

Only 24 points of actual offense were scored, 9 of which came on field goals.

With QB Ryan Willis out with injury, it was once again left up to Montell Cozart to lead the KU offense. Cozart wasn’t as steady as one would have hoped, throwing two interceptions which could have been 4 had they not been dropped, but transfer wide receiver LaQuvionte Gonzalez put on a show, catching six passes for 115 yards and a touchdown.

It was said that Gonzalez was so excited to play for the first time in a long time, that he arrived at the practice facility at 6 am Saturday morning.

Defense, though, was the story of the day.

Last year, the Kansas defense kept the Jayhawks in several games before they ran out of gas. Once again, Beaty has a unit that will keep the Jayhawks in the game. The hope is this year, Kansas will be able to put points on the board and support the defensive effort.

Like most spring games, Beaty and his coaching staff weren’t overly concerned with the actual score. Instead, they put more emphasis on the execution of situations in all three fazes of the game.

Despite a couple of easy drops for interceptions, the defense was ball-hawking all day, making it tough for the KU quarterbacks to get anything going.

There are a variety of takeaways from that, though. On one hand, the defense is making the types of plays which can change the course of a game, but on the other hands, the Kansas QB’s are struggling to make accurate passes and good decisions, and potentially, KU’s wideouts aren’t getting good separation from the defensive backs.

Hopefully for the Beaty and the Jayhawks, it says more about the defense than anything else.

The opener is scheduled for September 3rd against Rhode Island. Tickets are on sale now to KU’s opener and all home games at Memorial Stadium at Tickets For Less. With zero hidden service fees, what you see is what you get on all ticket purchases. Don’t miss out on your chance to see the Jayhawks take the field and build for the future with a plethora of young talent. Get your tickets today and Rock Chalk!