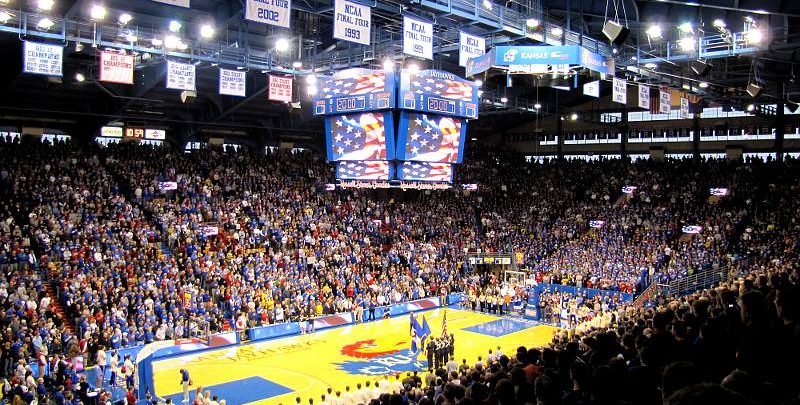 The official KU Men’s Basketball schedule has finally been released. With such a loyal fan base tickets are already being snatched up, but how do you know what game to go to?

First off there really is no bad game when it comes to KU Basketball. Here’s 2 reasons why:

So there you go, purchase with confidence. But if you want to drill down further let’s separate this year’s homes games into a few categories.

These are games where tickets won’t cost as much for a variety of reasons – opponent quality, time of year, impact on the season. While these are the cheaper KU games there’s no shame in buying a ticket; every game is great and sometime these games can generate the highlight plays that will be on the video reel for years.

18. Washburn – Tickets from $34. Yep, it’s an exhibition game but this is the first chance to see the Jayhawks and get a look at Josh Jackson.

17. Emporia State – Tickets from $32. Also an exhibition, the players are normally a little less nervous being the second game and play better all around.

16. Long Beach State – Tickets from $54. We’re in the regular season now but this match up isn’t as juicy as previous ones between the teams. This is probably a KU win and by a lot.

15. Siena – Tickets from $75. The regular season home game should be an easy one. But watching the Hawks kick the season off with a win is worth the price.

14. Davidson – Tickets from TBA. The last time these teams met Davidson pulled off a shocker and the time before that a Final Four spot was on the line. Great opponent but the game gets a downgrade for being in KC rather than Lawrence.

These are games earlier in the season against solid competition. Most of these games have an added element of intrigue making them a little pricier but ultimately more exciting.

12. UNC Asheville – Tickets from $125. This is a tournament team that many expect to make it back to the big dance this year. Hard to imagine them beating KU but this one might be close

11. Nebraska – Tickets from $119. KU and Nebraska haven’t played since Nebraska left for the Big 10. This will be a nice throw back to the early Big 12 and Big 8 days.

10. Stanford – Tickets from $99. Right now this game is the best non conference game on KU’s home slate. Major conference team and a little bit of revenge flavor with Stanford’s upset win 2 years ago.

It’s no secret that conference games mean more to Kansas. This year they’ll attempt to equal UCLA and win a major conference for the 13th year straight. That makes all these games huge.

9. Texas Tech – Tickets from $174. TTU made the tournament last year and returns a lot of players, but they also have a new coach who has never brought a team into the Phog. Could be close- could be a blowout.

8. Oklahoma State – Tickets from $149. Another Big 12 team with a new coach. Even though the rivalry has died down expect OSU to press making this an up tempo game and an exciting ticket.

7. TCU – Tickets from $89. This is a bargain! Jamie Dixon will have TCU playing good basketball by the end of the season and we think TCU finishes top 7 in the conference.

6. Baylor – Tickets from $129. A repeat tournament team that always has talent and normally brings out the best in KU.

These games are a combo of rivalries and match up against teams that could pose a threat to KU’s Big 12 dominance.

5. Iowa State – Tickets from $194. Monte Morris still lurks in the back court but no more Georges Niang takes a little zing out of this game. Expect this to be a clash of ranked teams.

4. Texas – Tickets from $159. Lots of talent and year number two under a great coach, Texas will be good. We could be looking at a Top 15 match up here.

3. Kansas State – Tickets from $129. First conference game and it’s against your rival. Regardless of record, the Fieldhouse will be extremely loud.

It might not end up being the triple overtime thriller with OU from last year or the overtime win against Kentucky but these are the best games to see this year. They will likely have a massive impact on who wins the Big 12.

2. Oklahoma – Tickets from $165. This is senior day against a team that might challenge for the conference crown. It’ll be your last chance to see Frank Mason, Landen Lucas and likely Josh Jackson.

1. West Virginia – Tickets from $103. We get this is a bold move putting West Virginia at number 1 over OU. This will be the second time these two teams meet and win or lose you know that West Virginia is going rough KU up in Morgantown. This game will be a war like it always is and you’ll see a ton of emotion from all players and coaches involved.

*All ticket price data was pulled Sept 20th 2016 and is subject to change.