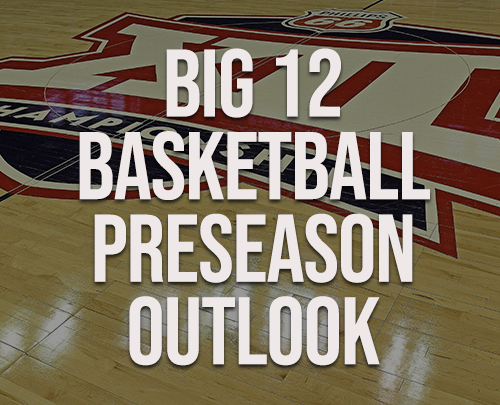 The deadline to withdraw from the NBA Draft has passed, meaning collegiate rosters are being finalized. With that, here is a look at the Big 12 Preseason Basketball Rankings, in terms of rosters, for the 2021-22 season.

With defending National Champion Baylor, a reloaded Kansas team and a major coaching change at Texas, the 2021-22 Big 12 basketball season has plenty of storylines. As the official ticket marketplace of the Big 12 Conference, Tickets For Less is your go-to source for Big 12 tickets across the country.

Out of all the teams in the conference, no team improved more after the NBA Draft withdrawal date passed than Kansas. Surefire starters Remy Martin, Ochai Agbaji, and Jalen Wilson all withdrew from the draft to return for another year of school. Accompanying them in the starting lineup will be David McCormack and either Joseph Yesufu, Christian Braun, or Jalen Coleman-Lands.

In addition, transfer forward Cam Martin should have a major impact from the bench, as he averaged 25 points and nine rebounds this past season in DII, while shooting over 45 percent from three-point range. This Kansas team could have ten players that play decent minutes, and with all those things in mind, they are the clear-cut favorite to win the conference and are a top contender for the National Championship. | TICKETS

Another team with National Championship aspirations, Texas enters this season with arguably their best roster in the last decade. Under new head coach and former Big 12 foe Chris Beard, Texas will be one of the teams to beat in the conference this year. The starting lineup will likely consist of Kentucky transfer Devin Askew, Courtney Ramey, Andrew Jones, Vanderbilt transfer Dylan Disu, and UMass transfer Tre Mitchell. In addition, both transfers Timmy Allen of Utah and Christian Bishop could vie for a starting spot, but at least will be huge bench production. Freshman forward Jaylon Tyson could quickly move up the ranks, and both Jase Febres and Brock Cunningham should see minutes. If star transfer Marcus Carr picks Texas over the NBL in Australia, Texas will immediately become a national title contender.

The defending national champions, the Baylor Bears have another roster that could do some serious damage in the Big 12 this year. After losing Jared Butler, Davion Mitchell, and MaCio Teague, the Bears were able to grab a couple players that should help fill the void. Arizona transfer James Akinjko and returnee Adam Flagler will likely take the two guard spots, while freshman Kendall Brown and Matthew Mayer will be at forward, and the high-energy center Jonathan Tchamwa Tchatchoua will be the final starter. Four-star freshman guard Langston Love should also be a major contributor from the bench. The main cause of separation between the top two teams in Kansas and Texas and Baylor is depth.

A team that could surprise a lot of people, Oklahoma State’s roster might’ve actually gotten better after losing the likely number one overall pick in the 2021 NBA Draft in Cade Cunningham. With returning guards Avery Anderson and Ice Likekele, the Cowboys have two solid two-way guards who have showcased real potential. Along with them, Kansas transfer Bryce Thompson should start and have a big impact as a scorer and athlete. Rounding out the starting five will be Kalib Boone and recent transfer center Moussa Cisse of Memphis. While he might not be seen as a star player in the conference, Avery Anderson is a player who could quickly become a favorite to land on an All-Big 12 roster when the season ends.

After the top four, there is a clear drop off in the quality of teams. With the departure of coach Chris Beard, Texas Tech was forced to replace their head coach with Mark Adams. On Friday, the Red Raiders received the commitment of former Oral Roberts standout Kevin Obanor who will greatly improve the outlook of their team. Forward Terrence Shannon Jr. will likely be another huge player for Adams, along with Kevin McCullar, Marcus Santos-Silva, and Louisiana transfer Mylik Wilson. With one scholarship remaining after Obanor’s commitment, the staff will likely target a lead guard in the portal to finalize the roster. While the team likely won’t wow anyone, they should be on a similar level to West Virginia and hover around the middle of the pack.

West Virginia should be a very good team, but they likely won’t be seen in the AP Top 25 very often unless they comfortably exceed their expectations. Their star players will be Taz Sherman, and Sean McNeil, both of whom averaged over 12 points per contest last year. Redshirt sophomore Jalen Bridges, Isaiah Cottrell, and Gabe Osabuohien will likely round out the starting five. With so many new scholarship players, it’s hard to see where exactly West Virginia will stack up, but with that starting five, they should most likely be in the middle of the pack or slightly above it.

After finishing a game above .500 in the conference, Oklahoma is looking improve under new head coach Porter Moser. Transfers Jordan Goldwire of Duke and brothers Tanner and Jacob Groves of Eastern Washington will most likely be there three best players along with returning guard Elijah Harkless. Four-star guards C.J. Noland and Bijan Cortes and three-star guard Alston Mason should all see the floor for Moser. While they won’t be a threat to win the conference, Oklahoma should be a solid tournament team this year and the future looks bright under coach Porter Moser.

After getting three key players from the transfer portal in Micah Peavy of Texas Tech, Shahada Wells of UT-Arlington, and Emmanuel Miller of Texas A&M, TCU should be much better than they were last year. In addition to their transfers, center Kevin Samuel will come in as one of the best centers in the Big 12 this year, and sophomore guard Mike Miles should have a much bigger impact this season. As a borderline tournament team, TCU should be towards the middle or back end of the conference when the year comes to a close.

After another poor season last year, Kansas State should be marginally better than they were last season, at best. Nigel Pack will likely be the best player after averaging almost 13 points per game and was a 40 percent three-point shooter as a freshman. Center Davion Bradford is another player who could be their best player after great showings towards the end of the season. Mike McGuirl will give them a leader and experienced guard, but these three pieces likely won’t be enough to get the Wildcats into the NCAA Tournament. Kansas State will most likely finish in the bottom three of the Big 12 again.

After going an unbelievable 0-18 in conference play just a season ago, Iowa State is in the midst of a complete rebuild. The highest ranked recruit in program history in Tyrese Hunter should help improve their record, along with Denver transfer Robert Jones who averaged 9.1 points a year ago. George Conditt IV, Javan Johnson, and Caleb Grill are the other players who will likely start for the Cyclones. After losing their best player in Rasir Bolton to Gonzaga, it will be another difficult year for Iowa State, but the future looks brighter.

Note: The official Big 12 Coach and Media Polls will come out later this year