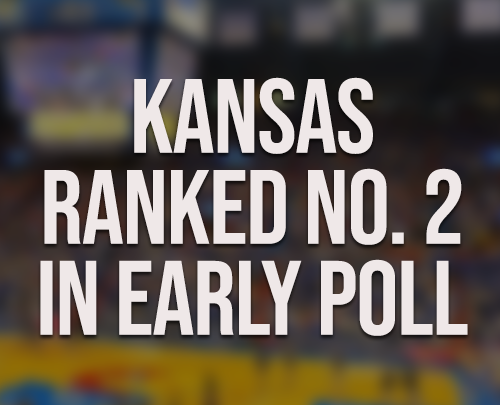 ESPN’s Jeff Borzello released an updated Way-Too-Early Top 25 college basketball ranking on Tuesday, with the Jayhawks up a couple spots.

After coming in at the fourth spot in Borzello’s previous rankings, Bill Self and his Kansas squad were moved up to the No. 2 spot behind the top-ranked Gonzaga Bulldogs.

Kansas ‘ranking improvement likely stemmed from Ochai Agbaji’s decision to return to Lawrence for his senior season. Agbaji averaged a team high 14.1 points per game on 42 percent shooting last season. He also shot at a 37 percent clip from three-point range on over 200 attempts.

Although it was Agbaji’s announcement to return that likely catapulted the Jayhawks up the list, Borzello notes that it is incoming Arizona State super senior transfer guard Remy Martin who will be the “X-Factor” for this year’s squad.

Martin, who recently turned 23 in June, will bring the facilitating, scoring, and leadership that Kansas lacked at the guard position last year. While Marcus Garrett did a commendable job handling the duties, it was not his true position. That ended up hurting Kansas when the Jayhawks needed a playmaker at the point guard spot.

The Jayhawks will open the season with an exhibition game at home against Emporia State on November 3rd, followed by a return to the State Farm Champions Classic on November 9th.  | TICKETS